Mumbai: India’s general insurance industry saw its profit drop by more than 90 per cent to Rs 683 crore in the fiscal year 2018-19, compared to a profit after tax of Rs 6,909 crore in FY18, data from the annual report of Insurance Regulatory and Development Authority of India (Irdai) showed.

The public sector general insurance firms posted a loss of Rs 3,228 crore in FY19 as against a profit of Rs 2,543 crore in the same period last year, mostly on the back of losses incurred due to natural calamities across the country in this period. Private insurers performed better compared to their state-owned peers even they reported a marginal decline in profits in FY19 to Rs 3,584 crore compared to Rs 3,798 crore in FY18.

“ICICI Lombard continued to be the largest private sector general insurance company with a market share of 8.55 per cent…Bajaj Allianz, the second largest private sector general insurance company, which underwrote a total premium of Rs 11,059 crore reported an increase in market share from 6.27 per cent in 2017-18 to 6.53 per cent during the year in review,” Irdai report said. 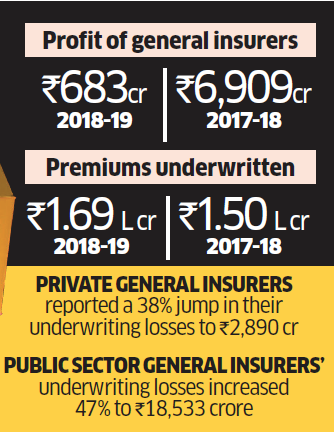