In September 2018, former Reserve Bank of India Governor Raghuram Rajan had flagged the potential credit risks in schemes such as the Pradhan Mantri Mudra Yojana (PMMY), popularly known as the Mudra scheme, in a note to federal lawmakers. Rajan may have been the first to highlight this risks, but he is not the only one.

Former central bank governor Urjit Patel, in his first public remarks after leaving Mint Road, warned the government in June this year against nudging public sector banks to over lend and pump prime the economy and boost preferred sectors, stating that doing so would lead to higher bad loans and fiscal deficit. He had said in his presentation at Stanford’s annual conference on Indian Economic Policy on June 3-4, “The Union Budget usually has announcement of ‘credit budgets’ on behalf of banks. T ..

Then in July, Governor Shaktikanta Das in a meeting with state-run bank chiefs had told them about poor credit appraisals and high proportion of non-performing loans in Mudra scheme. But all these warnings seem to have fallen on deaf ears.

THE MUDRA SCHEME
Launched in April 2015 by Prime Minister Narendra Modi, the Mudra scheme aims to offers loans up to Rs 10 lakh to small and micro enterprises. Mudra loans have three categories – Shishu, Kishore and Tarun. Shishu covers loans up to Rs 50,000, Kishore covers above Rs 50,000 and up to Rs 5 lakh and the Tarun category provides loans of above Rs 5 lakh and up to Rs 10 lakh. More than four years since the inception of the scheme, 192.4 million loans amounting to Rs 9.45 lakh crore have been extended  ..
The NPAs on Mudra loans by public sector banks, which also included regional rural banks, jumped to Rs 17,250.73 crore as on March 2019. In March 2018, loans worth Rs 7277.32 cr of public sector banks had turned bad. At the end of March 2017, bad loans were at Rs 3,790.35 crore while in March 2016 they were Rs 596.72 crore. 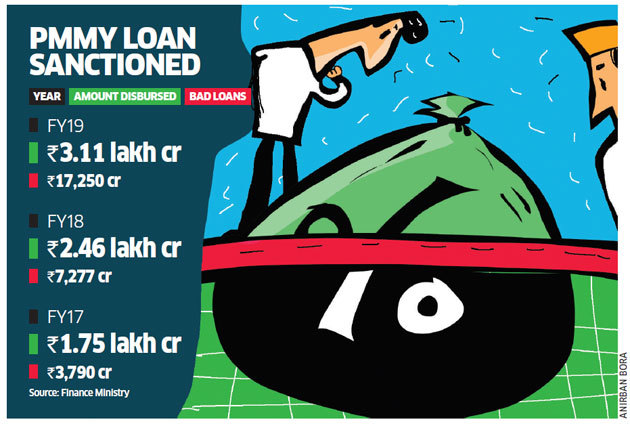 In a written reply to a question in the Rajya Sabha, the government had submitted that close to 3% of Rs 6.04 lakh crore worth of loans sanctioned under the Pradhan Mantri Mudra Yojana have turned bad at the end of March 2019.
THE NEXT CRISIS
Owing to the high level of NPAs in this segment, concerns have been raised over Mudra becoming the potential source for the next bad loan crisis. “Mudra is a case in point. While such a massive push would have lifted many beneficiaries out of poverty, there has been some concern at the growing level of non-performing assets among these borrowers,” MK Jain, deputy governor of RBI, had said earlier this month. “Banks need to focus on repayment capacity at the appraisal stage and monitor the loans  ..
“There is worry that this could become a systemic risk as most state-run banks have nearly 10% delinquency on this portfolio, which is too high for comfort,” said Kuntal Sur, financial services partner, PwC. “Look at the microfinance sector which is largely driven by NBFC-MFI and small-finance banks; their NPAs are less than 50 bps, and if this mass-scale portfolio can do well, why can’t banks do a better job with Mudra loans?”
LOANS IN SECONDS
Industry participants believe that schemes like the 59-minute loans, and poor choice of borrowers by public sector counterparts have brought the banking industry to its present mess. Unlike an MFI loan, in which the borrower is even physically known to the local service providers, a pure digital product may be a poor choice in such small-ticket loans.
Analysis by CARE Ratings showed that public sector banks performed dismally as compared with their private peers when it came to priority sector loan portfolio performance analysis. At the end of FY19, in the agriculture sector, PSBs recorded 11.36% loans going bad while the number was much lower at 3.78% for private lenders. For the industry loans falling under the priority sector, state-run banks’ bad loan ratio was at 16.45% versus 1.5% in private peers. In priority services sector loans, PSB ..
This begs the question: Why can’t PSUs perform on a par with private peers? “Look, there are 30-second loans as well, look at the way the bank which is offering that loan manages its risk,” said Romesh Sobti, MD, IndusInd Bank. “Nothing is inherently wrong in the time taken to disburse a loan; you can take one month and have a bad debt. What is being implied is: Was there pressure? Your underwriting practices cannot succumb to pressure. We also have a big Mudra loan book, our delinquency levels  ..
In the light of recent concerns over asset quality, there is no significant risk in the near term because in terms of individual exposure, Mudra disbursals have been in the range of 0.5-2% of outstanding loans of banks, Bank of America wrote in a report. In spite of the size and type of loans, Mudra NPAs so far have remained moderate at 2.86% (FY19), while for individual banks, Mudra NPAs as percentage of total bank loans remain range-bound within 0.1-0.4%. However, given the size and depth of p ..

Be the first to comment on "Performance on MUDRA loans: PSBs vs. private banks"