Mumbai: The National Company Law Appellate Tribunal (NCLAT) delved into Tata Sons’ board meeting records and legal documents, like the Articles of Association, to question the rationale for the removal of Cyrus Mistry as executive chairman. Wednesday’s momentous judgement by a two-member bench also criticised Tata Sons for not following proper procedures in converting itself into a private company from a public company.

Tata Sons did not follow the required procedures for the conversion, NCLAT said, adding that the process laid out under Section 14 of the Companies Act, which includes getting approval from the tribunal for conversion, was not followed. Tata Sons, through its lawyers, had argued that Mistry’s removal in October 2016 was due to poor performance. The group companies were making losses and the business situation had not improved significantly, they had argued. 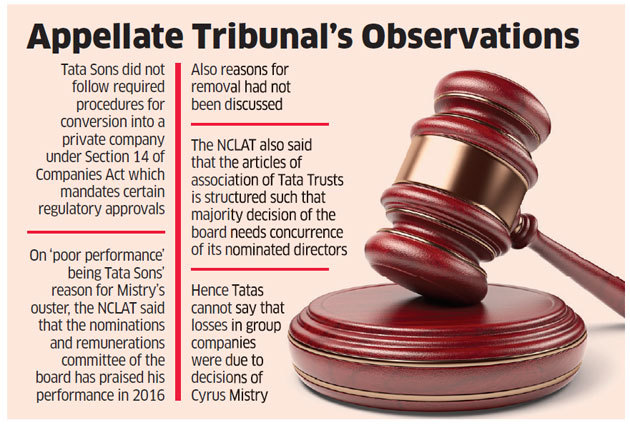 The court rejected the submission, saying that the nominations and remunerations committee (NRC) of Tata Sons board had roundly praised Mistry’s performance in June 2016 and many of the reasons given for the removal had not been discussed in board meetings. Legal experts say that Tata Sons can challenge the order in the Supreme Court to stop Mistry from joining the boards of group companies. “I don’t expect this order to stand the scrutiny of the Supreme Court,” said Mohit Saraf, senior partner, L&L Partners. “This is not going to be upheld in the Supreme Court and Mistry may resign after this order (or may try to negotiate a board position using the order) since it vindicates his stand,” he said. The order has also stated that Article 121of the Article of Association (AoA) of Tata Trust mandates that the majority decision of the board requires the affirmative vote of nominated directors of Tata Trusts.

“This amply demonstrates the preeminent position the directors nominated by Tata Trusts hold on the board of directors. This is the reason, the appellants have termed the power of the nominated directors of Tata Trusts as ‘veto power’, over the majority decision of the board,” observes NCLAT. “In view of the provisions, it is not open to the respondents (Tatas) to state or allege that loss in different Tata companies was due to mismanagement of Cyrus Pallonji Mistry.” Legal experts also raised q ..

Mistry argued in NCLAT that Tata Sons converted to a private company to avoid further scrutiny. “To ensure that prejudicial and oppressive acts (of Tata Sons) could proceed unchecked and to further the attempts at complete unilateral control of the company, a sudden attempt has been made to convert the company from public limited to private limited,” Mistry’s counsel argued.

Be the first to comment on "Procedures not followed in Cyrus Mistry’s ouster: NCLAT"