Anant Bhardwaj made it to the headlines this year when his technology firm Instabase was crowned as the startup that became a unicorn in its second funding round. Amidst the gloomy state of affairs, courtesy the WeWork debacle, Instabase remained largely unnoticed until it burst into the limelight with its entry into the coveted unicorn club in the US.

Talking to ET.com, Bhardwaj says the 2015-founded company scaled through many trial and error experiments. The 33-year-old computer science expert, who was back then pursuing PhD from the Massachusetts Institute of Technology (MIT), started Instabase with a system architecture project called DataHub. The project served as an operating system for the likes of Windows/MAC to cater to all types of users (experts, developers and non-technical users).

Following this, his team built some random apps such as ‘Notebook’ for universities and ‘Refiner’ to help data scientists structure their text data coming in the form of document scans and images. However, the apps didn’t seem to have much practical purpose.

“Honestly, we had no idea what we wanted to build,” revealed Bhardwaj.

Over time, the team came across many new customer demands and needs. A data scientist wanted to use the Refiner app to analyze insurance plans, which were in the form of PDF documents. Another lending company employee asked for a similar request to extract data and organise certain key fields such as gross pay, net pay from PDF documents, which were mostly camera-scanned.

This led to Instabase tweaking its apps with more solutions such as adding tools to read text from PDFs and developing an entirely new set of apps with respect to customers’ needs.

“From the conversations I had with customers and the feedback we received, we realised these apps could be used for a much broader interest,” Bhardwaj said.

Further, using these apps, businesses can create their own app. For instance, a bank can build a customer verification app through which a customer’s income can be verified in seconds by combing through documents submitted by them.

“Think of the iPhone, what made the app store successful was the underlying building-blocks that iOS provided- camera, location, etc., which developers and creators could use to build new apps such as Instagram and Uber,” quipped Bhardwaj.
Instabase was built on that ideology to provide a similar set of building tools for businesses. Further, the platform also offers a growing marketplace of pre-packaged business apps such as Adverse Media Analysis, Trade Finance, Income Verification, and Financial Spreading for other businesses. “One business’ solutions can be another business’ building blocks,” he said.
Versatility and simplicity
Reiterating how his firms’ apps are day-to-day useful and easy-to-use, Bhardwaj showed how the OCR app would help someone compare the changes in an edited contract from the original one in a fraction of a second. This could similarly work to find changes in any edited document in any form- PDF, scans, fax, or images.

Another handy app is the NLP, which helps people identify entities like names, companies, places and their relationships. Also, it uses natural language search and sentiment analysis to get more data about a person and aid in the verification process. For example, anyone can use the NLP app to gain negative information about a client. All anyone has to do is select “Adverse News” feature in Search Profile option and a list of all negative news ever will appear about the person or entity through  ..
Similarly, other features in the Search Profile include Class Action/Criminal Lawsuits, Drug Trafficking, Money Laundering, and Corporate Acquisitions, etc.,.
Instabase has helped clients such as Standard Chartered Bank to improve its client onboarding process. With the automation of KYC and client due diligence checks, the average client onboarding time has dropped from 41 days to 8 days.
Talking about its market potential, Bhardwaj said, “While a lot of our customers are from the bank and insurance sector, Instabase’s apps are something anybody can use- individuals, businesses, or government agencies. Government has a number of applications they can use Instabase such as applying for a passport, visa or for tax returns. Even healthcare, logistics and supply chain can simplify its day-to-day applications using Instabase apps.”
Adding more versatility to Instabase, he added that the tech startup can also help news agencies follow personalities they write about and know what’s happening with them in real-time.
Riding the unicorn pony
Instabase’s clients include Fortune 500 companies and startups. These include Standard Chartered Bank, SC Ventures, and various SMEs among others. Since its inception, Instabase has raised a sum of $132 million. Its October fundraising of $105 million was what took the valuation of the company to over $1 billion.
“We got lucky in terms of customers and money,” he said. 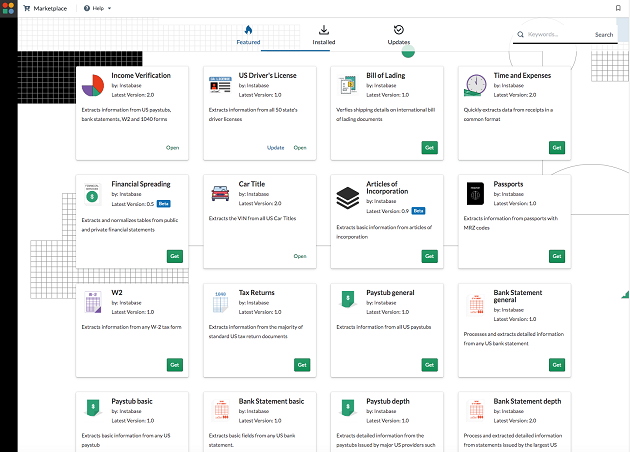 The firm’s list of investors includes NEA, Andreessen Horowitz, Greylock Partners, Index Ventures, Spark Capital, Tribe Capital, Glynn Capital, and Standard Chartered Bank.
One of Instabase’s board members, Pete Sonsini, General Partner and Head of Enterprise Investing at NEA told ET, “I was impressed by Anant’s vision and brilliance. He has the founder’s ‘it factor’ that investors are constantly searching for, but rarely find. Instabase’s traction to date is remarkable, and the company has been able to secure amazing customers and achieve significant revenue run rate without having touched their invested capital.”
When asked about competition, Bhardwaj shrugged it off, saying there’ll always be someone out there creating apps for the same purpose. He cited the example of an iPhone as he said, “Do you consider camera as competition for the iPhone? Or the GPS? Maybe, but the value of an iPhone wasn’t that it gave you a good camera, maps or GPS. Those things existed before the iPhone. The value of an iPhone was that it gave you the iOS operating system, which helped to build Instagram and Uber.”

In the meantime, Nalanda-born Bhardwaj also has nascent plans for Instabase’s entry in India. “We currently have an office in Bangalore with a small team of 4-5 and are looking to expand it significantly in the next few years. While we haven’t explored the idea of selling in India, the Indian banks and government agencies can be potential customers for Instabase. For now we are focusing on the US market, but yes ..

Be the first to comment on "Providing simple business solutions, this 42-people company is a Unicorn"